Get to know your cooking appliances

Feeling confused about cooking appliances? We don’t blame you, because the choice really is overwhelming. Ranges, ovens, microwaves, cooktops, warming drawers and hoods: where to start and how to combine? “Which ones are right for me?” we hear you asking.

Feeling confused about cooking appliances? We don’t blame you, because the choice really is overwhelming. Ranges, ovens, microwaves, cooktops, warming drawers and hoods: where to start and how to combine? “Which ones are right for me?” we hear you asking.

We can’t make the decisions for you, but we are happy to give advice. Our first and most important piece of advice is this: appliances shouldn’t be an afterthought.

Because of the variety of shapes and sizes, as well as features, appliances need to be tackled early on in your kitchen renovation journey. You’ll avoid having to re-jig the layout too many times and in the end, will thank us for the tip.

Read on for our advice on ovens, cooktops and cooker hoods, and you’ll be conversant in no time.

Your first decision is range vs built-in. There is a big difference (both practical and aesthetic) between the two options.

Being freestanding, range ovens evoke traditional kitchen design, and sit effortlessly beside white Shaker cabinets. They can equally find a place in a transitional style kitchen, even alongside sleek handleless cabinets.

Then there are the chef-inspired bigger and bolder pro ranges: grand and imposing, in need of a kitchen to match. They are perfect for making a statement and make for a great focal point in your kitchen. 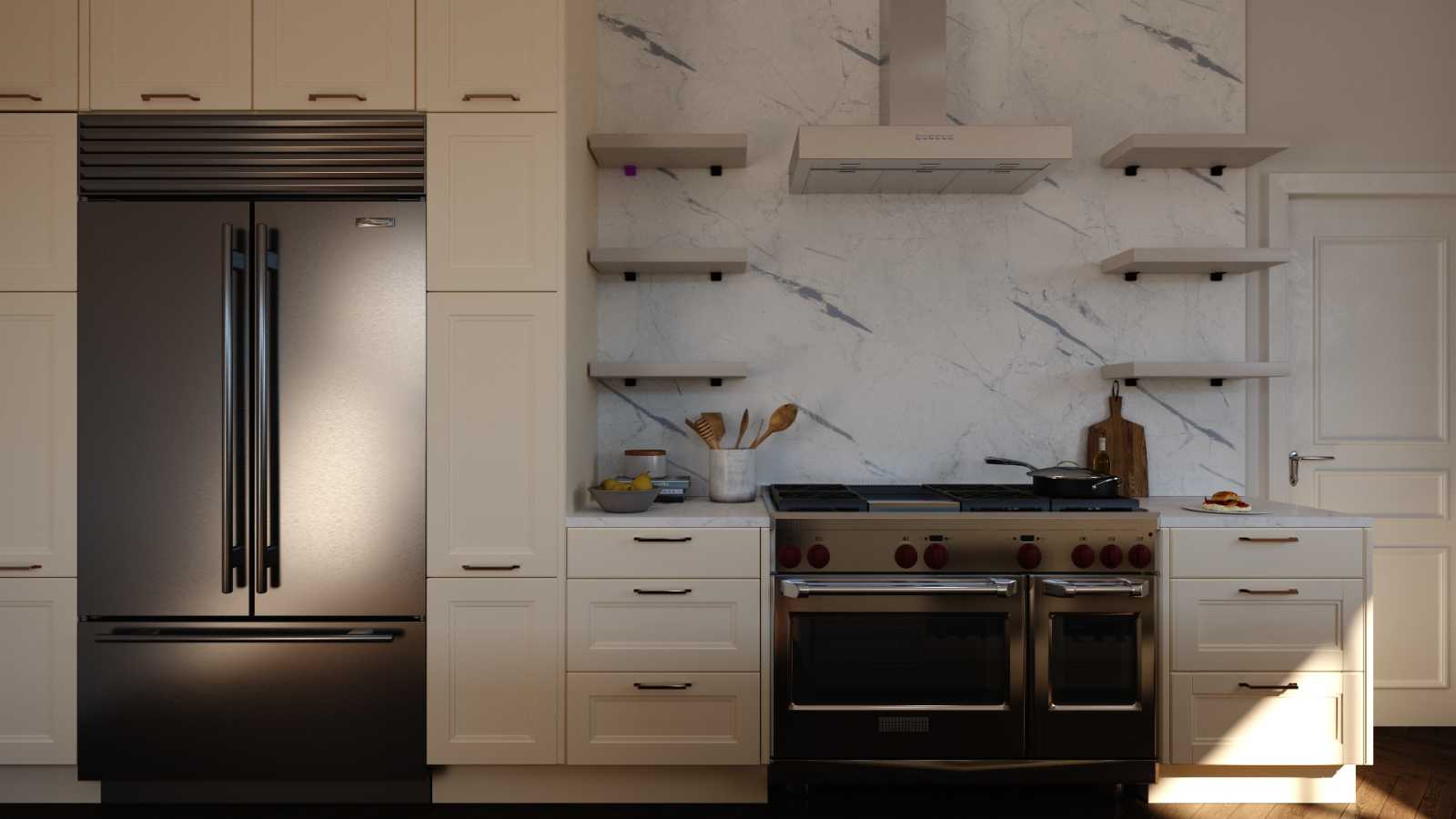 Built-in oven models are the ranges’ sleek and modern counterparts, inspired by European design. With flat minimal fronts, these blend seamlessly into a modern kitchen.

Although 30” ovens are common, you’ll be surprised by the room inside a 24” built-in oven. It’s not just the width that matters, but the usable capacity of an oven. And if you’re cooking for a big family or often find yourself entertaining, then stacking two ovens in a tower or placing them side-by-side is a great look. 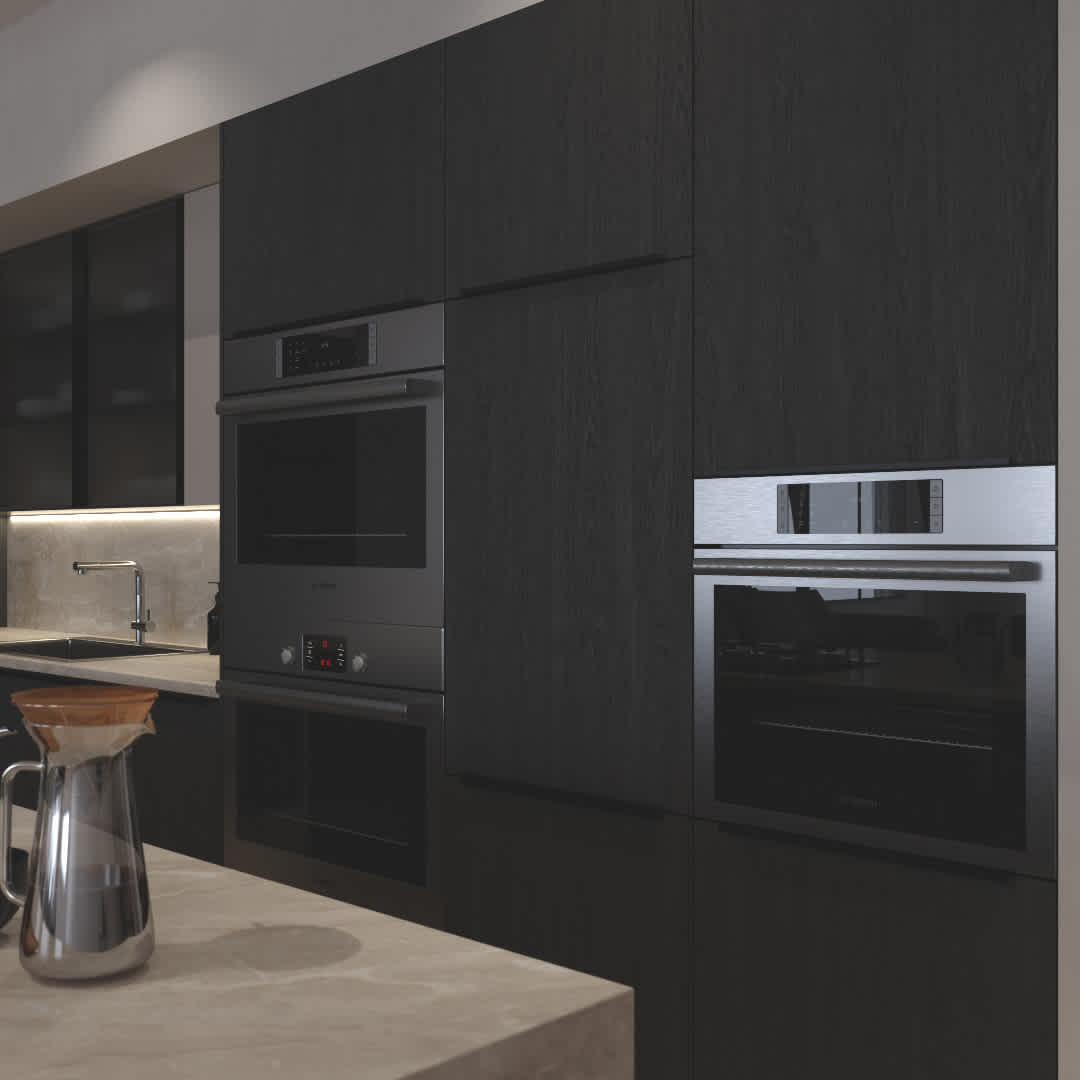 If you’re less concerned about style and more focused on the functionality of your kitchen, then your cooking needs should be your primary consideration when choosing appliances.

For an avid cook, the cooking style is worth identifying before settling on an oven for your new kitchen. Is the main function going to be making slow-roast dinners or reheating pizza? Yes, there are ovens that do it all, but if your cooking needs are very specific then there is likely just the right product out there for you.

Convection ovens are worth the small premium, as they guarantee a more even distribution of heat than their conventional counterparts. Steam ovens can be a great choice for healthy cooking and for retaining as much flavor and texture as possible in your meals.

Potentially useful additional functions range from the predictable (defrost) to the unexpected (wifi), and everything in between. And don’t forget the ease of keeping your oven clean: both steam and pyrolytic ovens are better than conventional in this respect.

Ergonomic implications aren’t often considered in decisions around oven purchases, but they should be. The most ergonomic choice is an oven that is placed at a comfortable height, eliminating the need to bend down (or reach too high up). 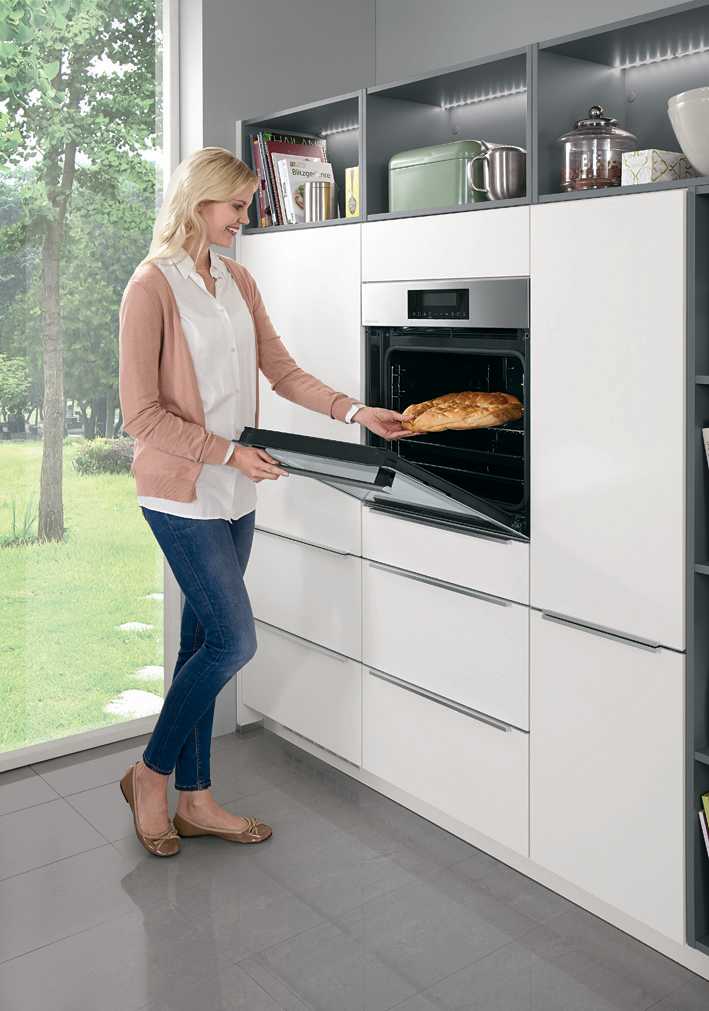 Some households couldn’t live without a warming drawer, others without a microwave. Does either apply to you?

Not everyone is familiar with the warming drawer concept. At around ¼ of the height of a standard built-in oven, this is a small but useful appliance that can be entirely hidden behind a cupboard front panel.

On the one hand, it can be used to keep warm hearty homemade meals for anyone running late for dinner. On the other hand, it also works for keeping your takeout food warm while you finish off the work calls.

Unlike warming drawers, microwaves are a very familiar appliance. Although placing it on the counter may have been fine in your old kitchen, there are much neater ways of integrating a microwave into your kitchen design. Depending on your needs, a microwave can slot neatly into a wall cupboard, a tower unit or a base unit. 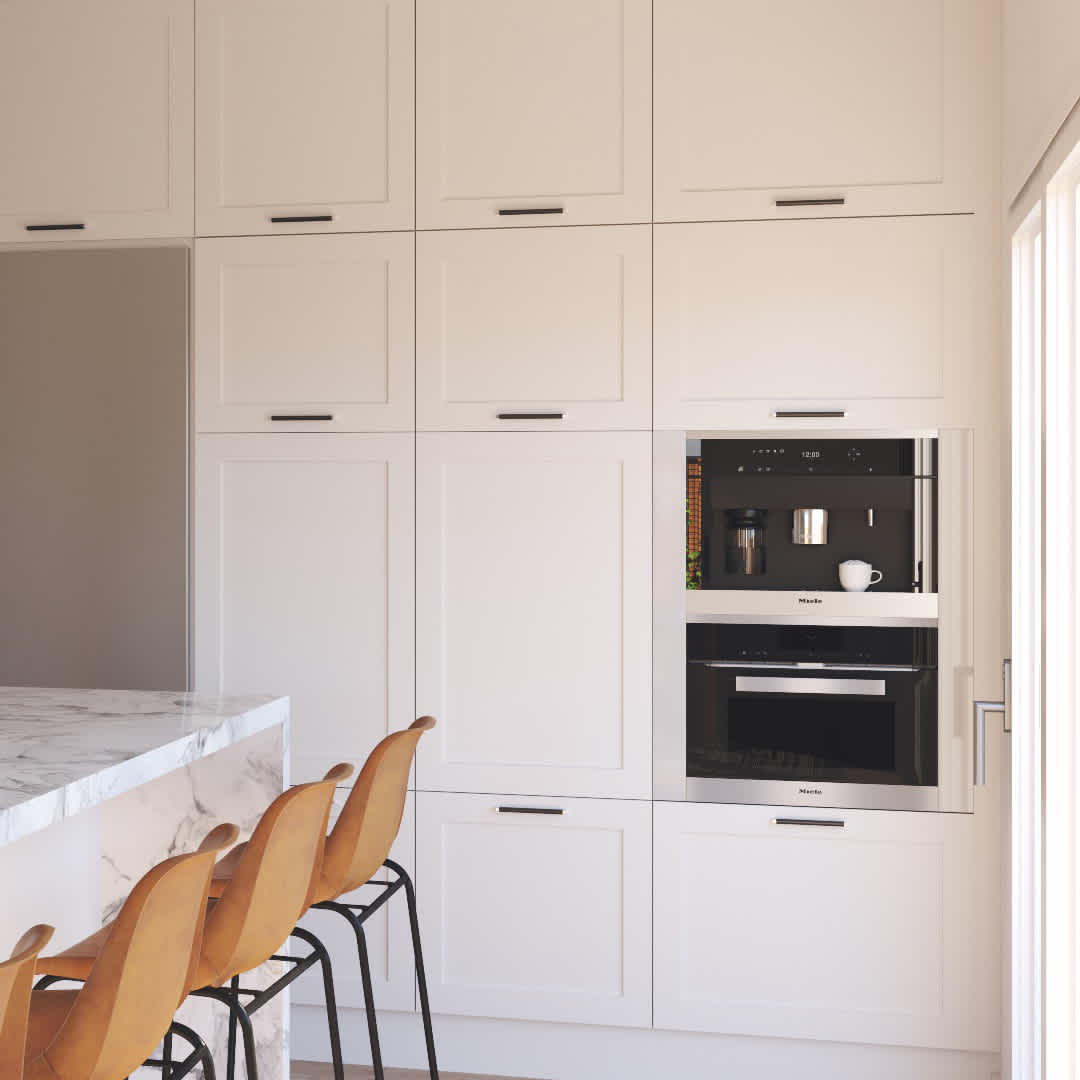 Even better, instead of a standalone appliance, you can now get combination ovens with an integrated microwave function. If you’re a ‘less is more’ sort of a person or if space is at a premium, then this one’s definitely your best bet.

If back in the day, buying a range cooker meant that you got a gas stovetop, and were left with one less decision to make, things are no longer as simple as that. You can pair a modern induction cooktop with a range just as you can pair a standalone gas hob with built-in ovens.

Most people will have a strong preference for gas or electric cooktops, based on habit and familiarity. Understandably, you’ll be more comfortable with one over the other. Still, we suggest that you do some research before committing, because you might be positively surprised by the latest technology.

Wok-cooking is a good example: standard induction hobs won’t work. However, you can now pick one up with an integrated wok ring (both electric and gas options are available). Similarly, you may feel restricted by the induction cooker if you batch cook in large casserole dishes. But you shouldn’t, because of the flexi zone that most induction cooktops now offer.

In general, old electric hobs were much slower to heat up than gas (instant). Induction is a big improvement in this respect. Although it can take time to get used to, the precision that you get with gas cooking can also be closely replicated with good induction cooktops.

You’ll want to think about the optimal cooktop size too. If there’s only ever one pot on it at once (if that), then a 24” width will be ample for you. It means you can save space for things you consider more important in the kitchen. But if you’ve always got multiple things on at once, then make sure to fit in a wider version. 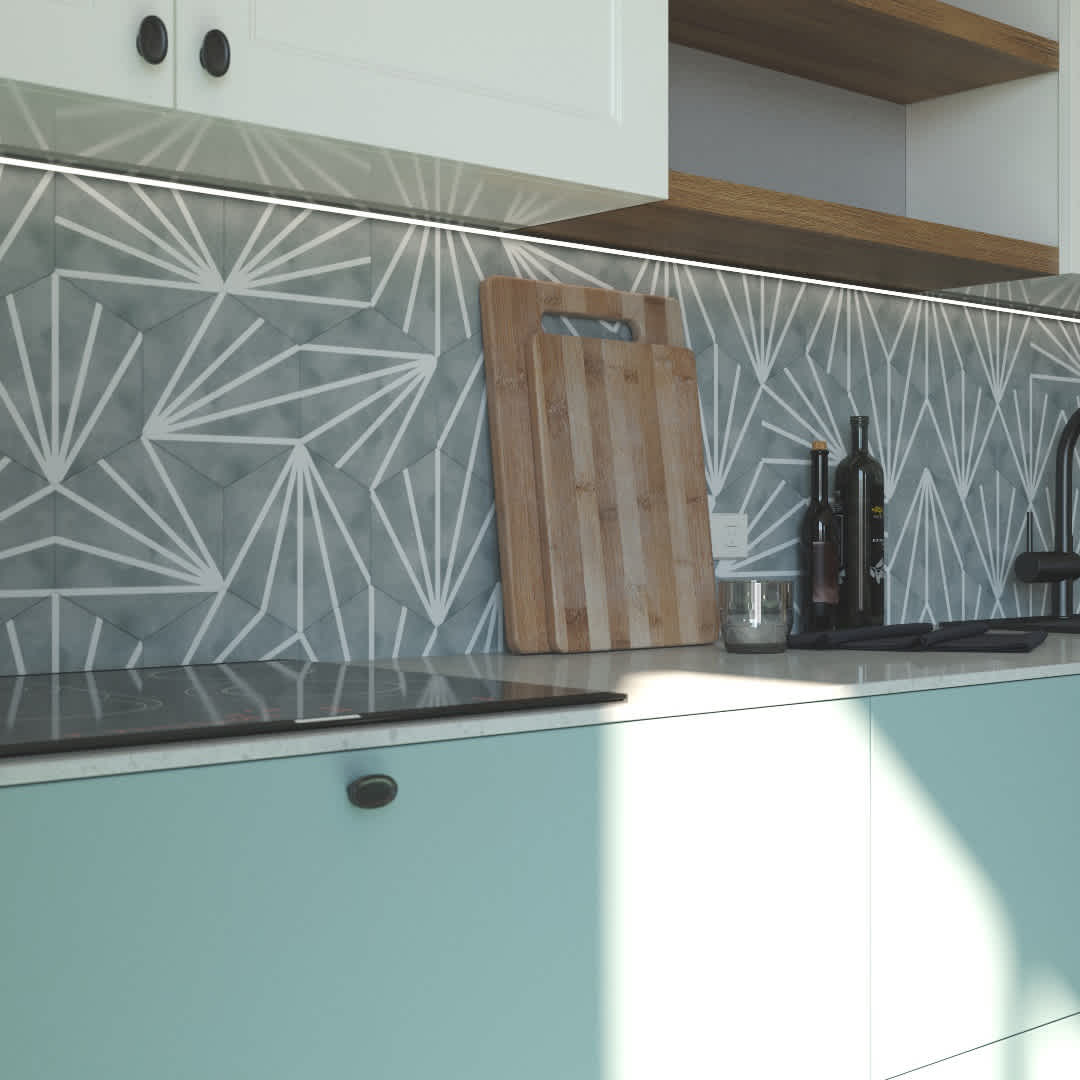 Shifting from one fuel type to another is not just a matter of preference. There are also some very practical aspects to it. For instance, if you’re replacing electricity with gas then you’ll need to ensure that a gas supply can be run to it.

This isn’t normally a problem, but it does require some planning. Remember to include any such re-routing and connections in your budget. You don’t want to get caught out!

Conversely, if you’re moving from gas to electric (and induction in particular), you may need to replace existing cookware. Again, not normally a problem, but it really depends on what you have and how you cook. Certain pans are incompatible: either they don’t heat up correctly or they might scratch the surface of your induction cooktop.

“Which one looks better?” you might be wondering. Well, it depends on your style! The smooth and seamless aesthetic of induction cooktops, especially the flattest ones, appeals to many. It has got to be the cooktop of choice in a minimalist home.

But then other people like the nostalgic associations of the gas burner, which has a certain charm to it, as well as its traditional appeal. The perfect pairing with a white Shaker kitchen!

On cleanability and safety, the induction option takes the win hands-down. Whether you’re concerned about small children or a forgetful partner, the induction cooktop is very unlikely to hurt anyone or set a tea towel on fire.

It’s also a wise choice if you don’t love cleaning. A quick wipe-down is all it takes: no small parts with disassembly and reassembly involved.

Although it might sound like we’re rooting for induction, in truth there are pros and cons with every option. Hone in on your priorities and purchase accordingly.

Some people consider the extractor fan to be an auxiliary appliance and don’t give it the credit due. Not the recommended route, if you ask us, because a good cooker hood is an essential kitchen appliance.

There’s a wealth of options out there. But remember that the first thing your extractor model will depend on is the positioning of your cooktop.

An island hob poses obvious challenges, and would have limited your extractor fan choices a lot, even a decade ago. Much less so now, because of how far the market has come. There are many contemporary suspended extractor models – from the architectural to the ornate – that create a great focal point in the kitchen.

For a more discreet solution, a fan can be built into the ceiling or into the island. Conveniently, there are even cooktops with an integrated extractor fan. Although not cheap, you’re getting two appliances in one.

For more conventionally positioned extractors on the wall, the main distinction is between exposed and cabinet models (with plenty of variety within each category!) If you’re looking to use every inch of space in your kitchen, then the cabinet model is a great solution. The shelves in front create handy spice jar storage, for instance.

In the exposed bucket, you have the grand statement pieces, stainless steel industrial inspired chimney style ones, and everything in between. And there’s a half-way solution, where the hood is placed inside housing (matching the cupboard fronts or a more bespoke creation).

Apart from positioning and looks, there’s also a host of features that are worth comparing when buying an extractor fan. Their primary function is to keep the air clean, so don’t ignore the technical specs.

Check out the noise and efficiency, as well as integrated lighting options. The number and types of settings on your chosen model also matter.

The good news is that extractor fans are progressively getting quieter and more efficient. Older models are loud, energy inefficient and not all that good at getting rid of cooking smells. You’re guaranteed to notice the difference when you upgrade.

Although both are colloquially referred to as extractor fans, there is a difference between the ducted and recirculating models.

The recirculating ones do not, in fact, extract the air. Instead, it is purified by passing through charcoal filters, then recirculated back into the space.

The benefit of recirculating fans is that they can be placed anywhere, and offer more choice in terms of unusual designs. Ducted models need a route to the outside, with ducting running through the ceiling, for example.

Ducted models are traditionally considered more effective. But the technology is moving fast, and the filter models are becoming more sophisticated and efficient by the day.

By deciding on the cooking appliances early, you’ll set yourself up for success with the design of your kitchen. Our experienced designers are here to help you integrate your chosen appliances into the kitchen of your dreams. It’s never too early to meet our designers.

"We believe that good design improves people's lives. We focus on personalization, performance, and peace of mind."